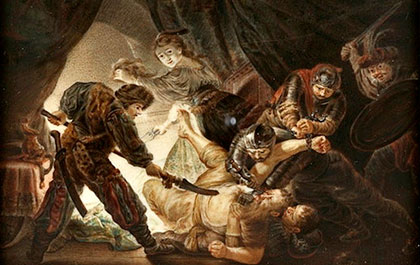 In modern terms, Samson went to prison for terrorist activities. When his enemies, the Philistines, captured him, they put out his eyes and set him to hard, repetitive labor. He became a spectacle of mockery and the object of taunts.

Samson was set apart from birth to begin the deliverance of Israel from the Philistines. Endowed with incredible physical strength, he was one of the great heroes of the Bible, but his weakness for women led to his downfall. Would God give him a second chance in prison?

Grinding grain was a common punishment assigned to prisoners throughout history. It brutalized them, reducing them to the level of stock animals. Such was Samson’s fate. His was a life sentence, too. For him, there would be no exit from prison except by death. He hastened that outcome, defeating his enemies through his suicidal death, and thereby giving relief to his country. Here is how the Bible describes it:

But the Philistines took him, put out his eyes, brought him down to Gaza, and bound him with brass fetters; and he ground corn in the prison house. However, the hair of his head began to grow again after he was shaven. Then the lords of the Philistines gathered themselves together to offer a great sacrifice unto Dagon their god, and to rejoice: for they said, “Our god has delivered Samson our enemy into our hand.”

And when the people saw him, they praised their god: for they said, “Our god has delivered into our hands our enemy, and the destroyer of our country, who killed many of us.” And it came to pass, while their hearts were merry, they said, “Call for Samson, that he may entertain us.” And they called for Samson out of the prison house; and they mocked him: and they set him between the pillars.

And Samson said to the lad who held him by the hand, “Allow me to feel the pillars that hold up this house so that I may lean on them.” Now the house was full of men and women; and all the lords of the Philistines were there; and there were on the roof about three thousand men and women, who looked on while Samson was exhibited for their entertainment.

And Samson called unto the Lord, and said, “O Lord God, remember me, I pray you, and strengthen me, I pray you, only this once, O God, that I may be at once avenged of the Philistines for my two eyes.”

And Samson took hold of the two middle pillars upon which the house stood, and by which it was held up, one with his right hand, and the other with his left. And Samson said, “Let me die with the Philistines.” And he bowed himself with all his might; and the house fell upon the lords, and upon all the people who were in it, so the dead which he killed at his death were more than he had slain during his life.