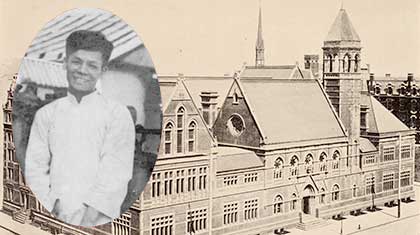 Union Theological Seminary in 1883. A History of Real Estate, Building and Architecture in New York City During the Last Quarter of a Century with image of John Sung superimposed (from Trinity Church as it appears at alchetron.com)

John Sung was the son of a Chinese Methodist preacher. As a teen, he was known as “The Little Preacher” because he assisted his father. He traveled to the United States to study science and theology and shone in his classes. Although he organized student religious groups, he neglected the Bible and prayer and lost interest in Christianity.

Cross: Jesus in China. For the first time in history, Christianity in China, especially the House-Church, is given an honest and comprehensive account. The film answers the question raised by many people outside China: how did the number of Chinese Christians increase from 700,000 in 1949 to approximately 70 million today, despite Communist control?

To appease his father, he enrolled at Union Theological Seminary in New York. The school’s president, Henry Sloane Coffin, openly scoffed at miraculous elements in the Bible. Like the modernist Henry Emerson Fosdick, he denied the bodily resurrection of Christ and other teachings of the Bible, while advocating a social gospel. Sung felt a hunger for true spirituality and turned to Taoism, Buddhism, and Confucianism.

The testimony of a fifteen-year-old girl in a fundamentalist church impressed him deeply. He recognized himself as a sinner and longed to be freed of his sins. He could not get rid of Christ’s question, “What does it profit a man if he gains the whole world but loses his soul?” In February 1927, he read the story of the Crucifixion and imagined himself at the foot of the cross, pleading for forgiveness. He heard Christ say, “Son, your sins are forgiven.” Immediately joy flooded his soul. He ran through the dorm, shouting “Hallelujah!”

However, his writings and statements during that time were often incoherent, conflicting, and suggestive of schizophrenia and paranoia. Henry Sloane Coffin brought in experts to examine Sung. They felt he had experienced a breakdown and urged him to commit himself to Bloomingdale Hospital at White Plains, an asylum for mentally ill people. Although at first he resisted, Sung finally agreed. However, he soon attempted to escape, which led the hospital to become more restrictive toward him. For much of his time at the hospital, Union paid the considerable cost of his care.

During the six months Sung spent in a cell in the asylum—as truly a prisoner as if he had been in jail—he said that he read the Bible cover to cover three times (later he claimed forty times “but not word for word”). Working with the Chinese consulate, Wilbur Fowler, a missionary friend, got Sung released. Sung returned to China, flinging away all his awards and diplomas, except his doctorate, which he kept for his father’s sake.

He spent the next fifteen years preaching throughout China and Southeast Asia. For the first three years, Sung had a relatively powerless ministry, involved principally in social causes. Eventually he learned to preach a gospel of repentance that spoke to Chinese hearts. It is estimated that over a hundred thousand people converted to Christianity under his preaching. He died at the age of forty-three.

In one of Sung’s letters to a colleague, he summarized his days in hospital with these words:

The Lord gave me a long-term rest and allowed me to go through many trials and suffering. During that period of time I could not help but be downcast. But as I look back now, it was all the grace of God. Thanks be to God. He put me in a cold hospital, a solitary place, where I led a lifeless and lonely life, so that I would draw nearer to God. Because of His great love He put me in a situation where I would gain many precious insights I would not have been able to gain otherwise. Though the sufferings of my trials is beyond the description of words, my advancement in the spirit during this period of time is also beyond the description of words. Therefore, brothers and sisters be prepared for suffering and follow the example of our Lord. He came to this world and left the footsteps of suffering, so that all who desire His revelation will follow in His steps willingly and happily.

In his testimony, Sung also described his hospital experience.

On the second day, a panel of scientists gathered to study the root of my sickness. They asked, Are your father and mother affected by mental sickness? Are your mother’s parents also affected? I said, Do you think me mad? Please examine my brain and see who is more lucid. Though they discarded me, God was with me. He taught me the Scriptures. The Holy Spirit led me to write down notes. I saw in the creation a revelation. I saw God as my loving Father. He gave me spiritual eyes. He taught me things of the Spirit. At this time … Satan came to tempt me. After the devil of conceit left the devil of jealousy came. Every day, a devil came. Thanks be to God, I won against the Devil through prayer. Though I was like a fish in the sea, I could rise like a bird in the sky.
At this time I was in the company of an inmate of 13 years. How could I stand it? I waited for a chance to escape. But they caught me within half a mile. Now they really regarded me a madman. I was bound hand and foot. I was put into an inner ward. My companions wailed day and night. How could I get any consolation? From sanity to insanity! I could only pray. God came to comfort me, Fear not, I am with you. This is your cross! I stayed in this wilderness for 193 days. This reminded me of the Lord Jesus who had borne our sins for 1930 years. So, I must bear this sin-load for 193 days. After 193 days, God said to me, Today is your day of release. True enough, a friend just returned from Europe to America became my guarantor. It fulfilled what God revealed to me.

The following quote is also attributed to Sung, but may not be original with him.

“Faith is watching God work while you are on your knees.”