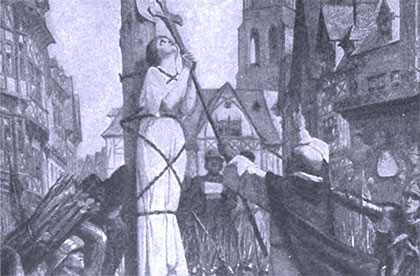 “Joan of Arc Bound to the Stake,” by Lenepueu, in John Henry Haaren and Addison B. Poland’s Famous Men of the Middle Ages (New York: American Book Company, 1904).

French national identity is impossible to understand without Joan of Arc. The story of the peasant girl who inspired an irresolute king and his hopeless troops, guided by God and the voices of saints, is legendary. Her name is invoked by all parties in French politics. Yet those who owed their victories to her, abandoned her to judicial murder by her enemies when she was captured. No one aided her.

Modern law recognizes the need of the accused to receive a defense, even at public expense. Joan was forced to be her own defender against a gang of learned accusers. Yet the trial transcripts show a young woman of immense acumen and fortitude who answered firmly and adroitly, escaping many a cunning legal trap set for her. Here are examples from the Third Public Examination.

In their presence We did require the forenamed Jeanne to swear to speak the truth simply and absolutely on the questions to be addressed to her, without adding any restriction to her oath. We did three times thus admonish her. She answered:

“Give me leave to speak. By my faith! you may well ask me such things as I will not tell you. Perhaps on many of the things you may ask me I shall not tell you truly, especially on those that touch on my revelations; for you may constrain me to say things that I have sworn not to say; then I should be perjured, which you ought not to wish.”

Joan of Arc is the heroic story of a 19-year-old woman whose visions led her to unite France against English invaders. Five hundred years after she was burned at the stake for heresy, she was declared a saint and revered by the country she saved.

[Addressing the Bishop:] “I tell you, take good heed of what you say, you, who are my Judge; you take a great responsibility in thus charging me. I should say that it is enough to have sworn twice.”

“Will you swear, simply and absolutely?”

“You may surely do without this. I have sworn enough already twice. All the clergy of Rouen and Paris cannot condemn me if it be not law. Of my coming into France I will speak the truth willingly; but I will not say all: the space of eight days would not suffice.”

“Take the advice of the Assessors, whether you should swear or not.”

“Of my coming I will willingly speak truth, but not of the rest; speak no more of it to me.”

“You render yourself liable to suspicion in not being willing to swear to speak the truth absolutely.”

“We again require you to swear, precisely and absolutely.”

“I will say willingly what I know, and yet not all. I am come in God’s name; I have nothing to do here; let me be sent back to God, whence I came.”

“Again we summon and require you to swear, under pain of going forth charged with that which is imputed to you.”

“A last time we require you to swear, and urgently admonish you to speak the truth on all that concerns your trial; you expose yourself to a great peril by such a refusal.”

“I am ready to speak truth on what I know touching the trial.”

And in this manner was she sworn.

“Besides the Voice, do you see anything?”

“I will not tell you all; I have not leave; my oath does not touch on that. My Voice is good and to be honored. I am not bound to answer you about it. I request that the points on which I do not now answer may be given me in writing.”

“The Voice from whom you ask counsel, has it a face and eyes?”

“You shall not know yet. There is a saying among children, that ‘sometimes one is hanged for speaking the truth.’ ”

“Do you know if you are in the grace of God?” [a trick question, since the theologians held that no one could be sure of salvation until they had stood firm to their final breath.]

“If I am not, may God place me there; if I am, may God so keep me. I should be the saddest in all the world if I knew that I were not in the grace of God. But if I were in a state of sin, do you think the Voice would come to me? I would that every one could hear the Voice as I hear it. I think I was about thirteen when it came to me for the first time.”