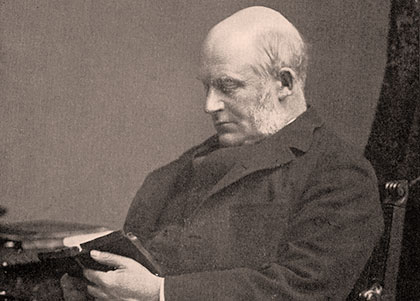 [ABOVE—Lord Radstock. It was through his influence the Russian revival began, in which the Inspector of Forests was converted. Mrs. Edward Trotter, Lord Radstock, an interpretation and a record (London: Hodder & Stoughton, c. 1914).]

I wish we could furnish the name and a photo of the man featured in this story. We cannot. But we are convinced that, although he was considered a nobody in this world, God not only knows his name but has a new one reserved for him in heaven.

Excerpt from Mrs. Edward Trotter’s Lord Radstock: an Interpretation and a Record.

During the revivals with which Lord Radstock was connected in Russia, the meetings in St. Petersburg were like those of the Primitive Church, and remarkable and instantaneous were the answers. A woman possessed and blaspheming became infuriated when brought among the praying band; but the intercessors continued until midnight. At last the evil spirit was cast out and she fell senseless to the ground. She became an earnest Christian, and her husband, a drunkard and a skeptic, seeing the miracle performed on his wife, came to the meeting, was delivered from drink and eventually became Inspector of Colonel Paschkoff’s forest near Moscow.

Here he discovered great dishonesty, and the guilty parties, to revenge themselves, accused him to the police of blaspheming icons, which was a great crime in Russia. Though innocent, he was sentenced to exile in Siberia for life. Chained to a gang of desperate characters to march a thousand miles on foot in cold that was 20° to 40° below zero, all hope of human help was abandoned.

Colonel Paschkoff hurried to Moscow to console him, but found him radiant with joy, saying, “How good the Lord is; I have been praying to work among prisoners and this is how my prayer is answered.” Colonel Paschkoff just had time to slip a testament into his hand before he was marched off.

A year later, in 1878, at one of the meetings of the McCall Mission in Paris, a gentleman asked leave to speak. He was a Jew by birth and had been a skeptic but when traveling in Russia some months previously, he had come across a batch of prisoners, one of whom attracted him by his happy face. He heard him say, “It is all joy,” and, astonished, asked him his meaning. The prisoner then spoke of the love of God which filled his soul. “How did he know about this love?” asked the visitor, and the prisoner showed him the testament.

The Jew begged to have it. It was the only book the prisoner possessed, but yielding to his entreaties, he relinquished it. “Now,” said the Jew, “I, too, know that Jesus is the Messiah and the Savior.”